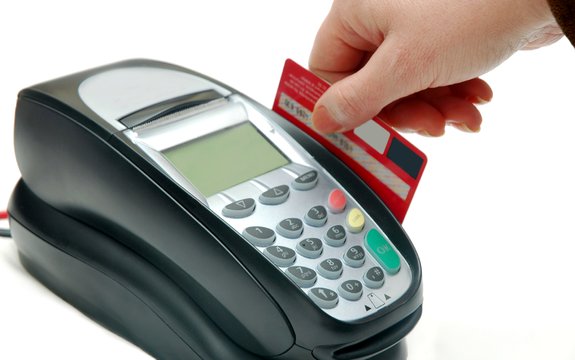 Royal River Natural Foods in Freeport sells wide selection of food products with many being local and organic. One of the biggest expenses any retailer, including Royal River, faces is the cost of accepting credit and debit cards. Some retailers have said they pay more in swipe fees than health insurance for their employees.

Almost every retailer accepts credit and debit cards. It is convenient for the consumer, but it comes at a high price for the business. The worst part is that a business never really knows how much they are paying to take someone's card. For example, a frequent flyer credit card may cost the retailer more than a local bank credit card. Credit cards usually have a percentage of the sale fee and possibly a per transaction fee - say 2.75% plus $.25 per transaction. So, a $100 purchase ends up costing the retailer $3 ($2.75 plus $.25).

For debit cards, the retailer usually pays just a flat transaction fee. It used to be $.44 per transaction.

The large card companies like VISA and Mastercard have all the power. They have a 1,000 page contract that they can change the terms of at any time and their fees to accept cards keep increasing every year. Something needed to change.

RAM worked with our national partners like Retail Industry Leaders Association and the National Retail Federation to draft legislation that would lower debit card fees. Although we have a desire to impact credit card fees, too, we knew that focusing on debit cards would have a better likelihood of success.

As the Dodd-Frank Financial Reform bill was being debated, the retail industry worked with Senator Durbin of Illinois to draft what is now known as the "Durbin Amendment" which would lower debit card fees from an average of $.44 a transaction to $.24 a transaction. However, we needed 60 votes in the US Senate for the amendment to be included. Every.single.vote.mattered.

With multiple trips to Washington, DC (some in the pouring rain!) and multiple emails and phone calls from our members, both US Senator Olympia Snowe and US Senator Susan Collins voted with retailers to support the Durbin Amendment. This was no easy feat. The senators were lobbied heavily by the bankers and credit card companies. It is notable that Snowe and Collins were two of only four Republicans that voted for the Durbin Amendment. Every vote mattered.

The Durbin Amendment passed, but not without controversy, and banks and credit card companies continue their efforts to repeal it. Retailers won this battle, but the war is not over. The issue continues in various forms in statehouses and in Washington, DC. For now, retailers can enjoy lowered debit card fees, and we can look for ways to address credit card fees, too.