RAM and MTA Sends 40,000 Pounds of Humanitarian Aid to the People of Ukraine 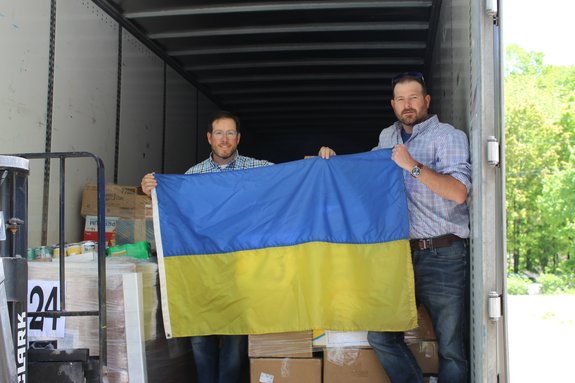 In late March, the Retail Association of Maine (RAM), and the Maine Tourism Association (MTA) launched From Maine to Ukraine, a statewide relief program that collected food, clothing, and household goods from Maine's retailers, tourism and hospitality businesses and everyday Mainers. On Monday, the associations shipped nearly 40,000 pounds of food, clothing and household goods to New Jersey where the items will be delivered to Lviv, Ukraine for final distribution to the people of Ukraine. The goods will fill nearly three shipping containers.

From Maine to Ukraine is organized by RAM and MTA who collaborated with the Association of Retailers of Ukraine to deliver food, clothing and relief to the people of Ukraine.

“When we launched this project, we had no idea how much we would collect. I know Mainers are generous people, but I was simply blown away by how thoughtful and helpful they were. In addition to the locations that we set up, some people set up their own collection locations, and the donations poured in,” stated Curtis Picard, president and CEO of the Retail Association of Maine.

The donated goods were consolidated at the MTA warehouse and shipped to a Ukrainian shipping company in New Jersey. From there, the containers will be shipped to Lviv, Ukraine.

“There are so many people who helped make this project successful. Our staff collected goods at the Maine Visitor Information Centers, and we had so many staff and volunteers help consolidate, and sort the items for shipping. This ended up being a huge project, but the support we received made it work,” said Tony Cameron, CEO of Maine Tourism Association.

“One of the things that really stuck with me were a number of handwritten notes from Mainers that were included with some of the donations. Some were even written in both English and Ukrainian. We didn’t open any of them, but packed them carefully in the shipment,” added Curtis Picard of RAM.