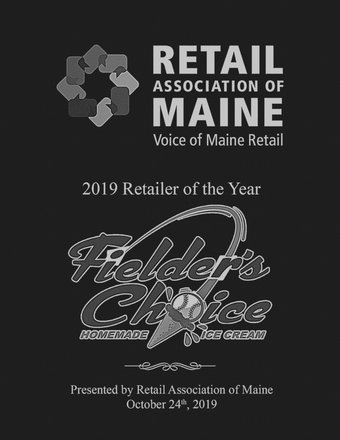 The board of directors of the Retail Association of Maine announced yesterday that Fielder’s choice Homemade Ice Cream with five locations throughout Maine, has been named the 2019 Retailer of the Year. The award was presented at the Retail Association of Maine’s 82nd annual meeting on Thursday, October 24, 2019 at the Samoset Resort, Rockport, ME.

The Retailer of the Year Award has three main criteria: continued growth in employees or sales; commitment of company resources to community projects; and creation of a positive work environment for all employees. This year encompassed a competitive field of nominations and Fielder’s Choice Homemade Ice Cream was chosen for its impressive growth, dedication to the communities they are in, and support of their employees. Fielder’s Choice values aligned perfectly with the award criteria and they were unanimously selected as this year’s recipient.

Fielder’s Choice Homemade Ice Cream was founded in 2004 when Michael and his wife, Sue, built the first location in Sabattus. Four years after that they opened the Manchester location and it was an immediate success- It is their top selling location. They have now grown to five locations across central and southern Maine. Fielder’s Choice employs more than 180 people in the height of their summer season many of those are students with whom they are providing their critical first job experience. Since their Manchester location opened, they have continued to expand to new locations almost every 18 months! That growth is astounding and with each location they build on what they have learned from previous experience and now with over 30 flavors of ice cream that they make and serve, they have truly found a recipe for success!

The Retail Association’s board, comprised of fellow retail businesses owners, recognized the impressive growth and commitment to giving back to the community which supports them. Curtis Picard, President and CEO of the Retail Association of Maine, stated, “The Maine Retailer of the Year is not about being the biggest retailer. It’s about making a difference in your communities and impacting the lives of your customers and employees. Fielder’s Choice personifies the hard work it takes to succeed as a Maine family-owned business.”

“It is truly humbling for our company to be named as Retailer of the Year,” said Mike Jillson, owner of Fielder’s Choice Homemade Ice Cream. “We never dreamed we’d have this kind of success. Just to be named with the other companies that have received this award, companies that we see as staple Maine businesses, is such an incredible honor. We have a dedicated team and family that works hard and we couldn’t do what we do without them.”

Fielder’s Choice Homemade Ice Cream is an involved community member. Mike and Sue sponsor local sports teams in all the communities they serve and contribute to many local events such as 5k races. Mike has also spent time talking with legislators and showing up to testify on issues that are important to small business owners such as minimum wage.

Head over to our facebook page to view the award video we created for Fielder's Choice! https://www.facebook.com/retailmaine/videos/419964372282929/