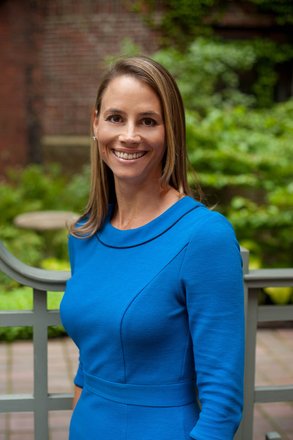 Augusta, ME – November 20, 2020 – Quincy Hentzel, CEO of the Portland Regional Chamber of Commerce, has been selected by the Retail Association of Maine Board of Directors to receive the organization’s 2020 Jim McGregor Award.

The Retail Association of Maine named this award after its retired director of government affairs, Mr. Jim McGregor, in 2010. Jim’s decades of hard work in the public policy arena paved the way for setting the standard for an award that recognizes an individual who goes above and beyond in support of Maine’s retail community.

As the head of the largest chamber of commerce in Maine, Quincy Hentzel has been a leader in advocating for businesses of all sizes. When the pandemic hit, she was quick to position the chamber as a valued resource for Portland-area retailers that temporarily closed. She worked with the Retail Association of Maine and Maine Grocers and Food Producers Association on a statewide Let’s Be Kind campaign that stressed patience, kindness and understanding between consumers and retailers. Additionally, she pulled together prominent businesses to take a principled stand against racism and tangible ways it can be addressed locally.

Throughout her professional career, Quincy is a leader who has earned the respect of many. Quincy is someone who can navigate the complex political landscape in the Portland region and bring together diverse opinions to help chart a path forward on a myriad of issues.

“I am very proud to see Quincy receive this award. Working with her on the Let’s Be Kind campaign was a huge bright spot in a very difficult year, but it’s been great to see her succeed on so many levels,” said Curtis Picard, President and CEO of the Retail Association of Maine. The Retail Association of Maine is pleased to honor Quincy Hentzel with the Jim McGregor Government Service Award for her commitment to helping Maine’s small businesses succeed.

"As an organization deeply involved with the needs of our local business owners and their employees, the Portland Regional Chamber strives to create initiatives that benefit the community as a whole. Whether through our Let's Be Kind or Pay It Forward Maine campaigns, or our Standing in Solidarity Against Racial and Social Injustice initiative, we recognize that the people of this community are at the heart of what we do. I am deeply humbled to be recognized by the Retail Association of Maine. It means a lot to me," stated Quincy Hentzel.

About the Portland Regional Chamber of Commerce:

Our organization represents 8 communities within the Greater Portland region - Cape Elizabeth, Cumberland, Falmouth, Gorham, Portland, Scarborough, South Portland, and Westbrook – as well as PROPEL, our young professionals' group. We are comprised of over 1,300 member organizations which represent over 65,000 employees. The Chamber works to enhance the Greater Portland business community through advocacy, collaborations, connections, and visibility. Learn more at PortlandRegion.com.