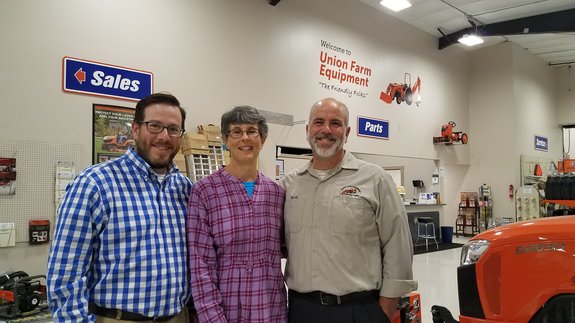 The Retailer of the Year Award has three main criteria: continued growth in employees or sales; commitment of company resources to community projects; and creation of a positive work environment for all employees. This year encompassed a competitive field of nominations and Union Farm Equipment was chosen for its reputation as a growing family business, impressive growth, dedication to their community and industry, and support of their employees. Union Farm Equipment’s values aligned perfectly with the award criteria and they were unanimously selected as this year’s recipient.

The Retail Association’s board, comprised of fellow retail businesses owners, recognized the impressive growth and commitment to giving back to the community which supports them. Retail Association of Maine, President and CEO Curtis Picard stated, “This is a prestigious award and Union Farm Equipment is a very deserving company. Ken and Debby Keiran do a great job running this family business including their three kids. They are known as ‘the Friendly Folks’ and it’s true. Customer service is a priority and they deliver it by the tractor-full. Maine needs more small businesses like Union Farm Equipment.”

“It is a true honor and incredibly humbling for our company to be named as Retailer of the Year,” said Ken Keiran, owner of Union Farm Equipment. “Running Union Farm Equipment is a lot of hard work, but the support from customers and community is incredible. We have a dedicated team and family that works hard to treat people in a manner in which we hope they will treat us."

Union Farm Equipment is an involved community member. Ken and Debby have served on various boards including the local library, school board and the Union Fair board. They also sponsor area sports teams including Little League, Babe Ruth and are major contributors to the Union Fair, the Blue Hill Fair and the Windsor Fair and support the MidCoast School of Technology with expertise, advise and equipment to help train future small engine and diesel engine workers. Union Farm Equipment is the 2017 Union Area Chamber of Commerce Business of the Year, the 2017 Disabilities Commission of Maine Business Employer of the Year and the Honda Environmental Leadership Award. Ken was recognized in 2017 as an America’s Retail Champion finalist by the National Retail Federation.