STANDING THE TEST OF TIME: DAY’S JEWELERS NAMED 2016 RETAILER OF THE YEAR 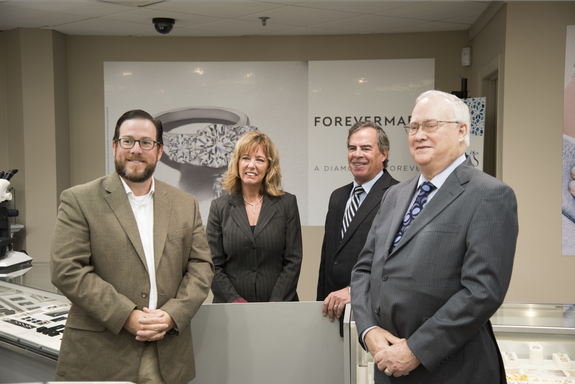 The Retailer of the Year Award has three main criteria: continued growth in employees or sales; commitment of company resources to community projects; and creation of a positive work environment for all employees. This year encompassed a competitive field of nominations and Day’s was chosen for its reputation as a growing family business, patient and careful long term growth, social, ethical and environmental responsibility, and staff development procedures.  Day’s Jewelers’ values aligned perfectly with the award criteria and they were unanimously selected as this year’s recipient.

Day’s was one of the first jewelers in America, and currently only one of  six independent companies in the United States to achieve certification by the Responsible Jewellery Council (a non-profit organization which has established a set of best practice business standards for the global jewelry industry  requiring audits to ensure certification). In the last few year’s Day’s Jewelers has worked collaboratively with their staff, customers and suppliers to donate to more than 40 charitable organizations and has developed a program, called “Diamonds for Peace” to help those in need within our own communities by donating $10 for each loose diamond or piece of diamond jewelry sold.

The Retail Association’s board, comprised of fellow retail businesses owners, recognized the continued challenges Day’s faces in this competitive market.  Retail of Association of Maine, Executive Director Curtis Picard stated, “This is a prestigious award and Day’s is a very deserving company; taking a brand that had grown, faced a reduction in the number of stores and is now expanding to a new location in Augusta.  To grow it back to where it is today and recognized as one of Maine’s Best Places to Work, that’s impressive.”

In 2014, Day’s celebrated 100 years in business. Over the past century, Day’s has been family owned and operated by only two families with a strong connection to each other. Day’s was founded in 1914 by Harry Davidson and his 3 sons. The first Day’s store was located in Portland. Over a period of 60 years, the company became the largest retail jeweler in New England with 22 stores in Maine, New Hampshire and Vermont.  In 1938, the Davidson’s hired 11 year old Robert Corey as a stock boy in their Downtown Portland Store. At 19 years old, Corey was transferred to Caribou, Maine to manage Day’s new northernmost location.  He eventually left Day’s in 1951 to open his own store, Robert’s Jewelry in Madawaska, Maine where he and his wife Enid (Sleeper) Corey raised 7 children who all worked together in the family business.

In the early 1970’s the aging Davidson brothers, unable to find a buyer for the Day’s chain, began closing their stores. In 1988, with only one Day’s store left, the company was sold to Robert Corey’s 2 sons, Jeff and Jim along with Jeff’s wife Kathy. The Corey family combined skills and knowledge from the Davidson’s Day's Jewelers with modern technology to create a jewelry retailer for a new era.  Day’s continues to innovate and utilize new technologies to provide an experience that exceeds expectations through exceptional personal customer service, fine quality, and low prices.

In an effort to foster company growth, in 2012 the Corey’s hired David Harris as President of Day’s. Mr. Harris came to the company with more than 40 years of experience in the jewelry industry including senior management positions with Zales, Gordon and Whitehall Jewelers.

“It is a true honor for our company to be named as Retailer of the Year”, stated David Harris. “Kathy, Jeff and Jim have come a long way from their humble beginnings in Madawaska and Fort Kent to make Day’s one of the most respected retailers in the U.S. jewelry industry. It has been a pleasure to work in a company where customers and employees are treated like part of the family”.